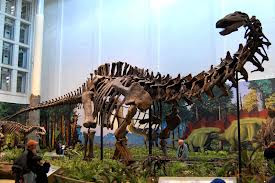 With the correct skull, it's an Apatosaurus as shown here.


This post concerns the very, very ancient, but it’s here because it’s a fascinating tale. It seems the fierce competition for fame between two palentologists ~ O.C. Marsh of Yale and Edward Cope of Philadelphia ~ led to the false creation of the Bronosaurus, a creature that, as it turns out, never existed.
According to NPR, quoting Matt Lamanna of the Carnegie Museum of Natural History:

It was in the heat of this competition, in 1877, that Marsh discovered the partial skeleton of a long-necked, long-tailed, leaf-eating dinosaur he dubbed Apatosaurus. It was missing a skull, so in 1883 when Marsh published a reconstruction of his Apatosaurus, Lamanna says he used the head of another dinosaur — thought to be a Camarasaurus — to complete the skeleton.

"Two years later," Lamanna says, "his fossil collectors that were working out West sent him a second skeleton that he thought belonged to a different dinosaur that he named Brontosaurus."

But it wasn't a different dinosaur. It was simply a more complete Apatosaurus — one that Marsh, in his rush to one-up Cope, carelessly and quickly mistook for something new.

You can easily guess the rest of the story. What’s particularly amazing is that the two warring paleontologists even ordered some dinosaur skeletons to be smashed to pieces while still in the ground, just so the other fellow wouldn’t unearth them.
Click here for the article.
Posted by Gregory LeFever at 8:48 AM