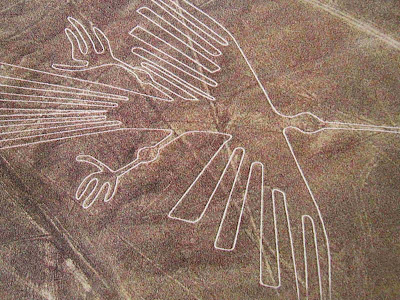 In the absence of a firm archaeological conclusion a number of fringe theories have popped up, especially several aligned with “ancient astronaut” theories. A less radical suggestion is that the Nazca people used balloons to observe the lines from high altitudes, something for which there still is no archaeological evidence.
Click here for the article.
Posted by Gregory LeFever at 5:33 PM

The best summary of work on the lines is to be found in Moseley (2001), 'The Incas and their Ancestors', pp. 201-203. If the people of the Nazca valley had discovered a way of viewing the geoglyphs from above, they evidently forgot the technology and told no one else about it.

It would also mean that the people cared little for the glyphs, as most of them have been cut into by other glyphs of a later date, indicating either that they did not observe them from above (the most plausible option) or that they found a way of observing the land from above, carved glyphs by observation from above that partially obscure older glyphs, and then forgot the technology enabling this.

The most parsimonious interpretation is that the glyphs were not seen directly from above by any humans until the invention of aircraft in the early twentieth century. The glyphs were probably ritual walkways, designed using stakes and string. No crazy explanation is necessary, nor even the positing of a plausible but unattested technology.