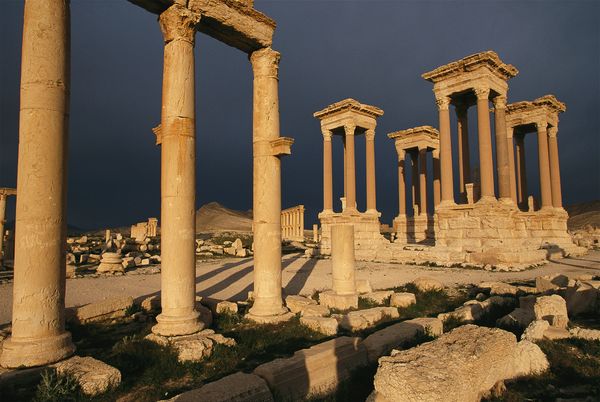 
Historical evidence points to ancient Palmyra ~ sitting today in the middle of the infertile Syrian desert ~ as having been a major trading metropolis during the Roman Empire. Once a caravan stop that brought Asian goods west to eager Romans, the site has "always been conceived as an oasis in the middle of the desert, but it's never been quite clear what it was living from," says Michal Gawlikowski of the University of Warsaw.
According to National Geographic:

Among the ruins are grand avenues lined with columns, triumphal arches, and the remains of an ancient market where traders once haggled over silk, silver, spices, and dyes from India and China.

To find out what made it all possible, archaeologist Jørgen Christian Meyer began a four-year survey of the 40 square miles just north of Palmyra in 2008. The area was targeted for its mountainous terrain, which channels precious rainwater to otherwise dry streambeds—making the region marginally less hostile to agriculture.

Through ground inspections and satellite images, the archaeologists eventually found outlines of more than 20 farming villages within a few days' walk of the city—adding to about 15 smaller settlements previously uncovered by other researchers to the west of Palmyra.

The surrounding landscape now appears to have been intensively farmed and most likely included olive, fig, and pistachio groves—crops known in the region from Roman accounts and still common in Syria.
Click here for the complete article.
Posted by Gregory LeFever at 4:27 PM