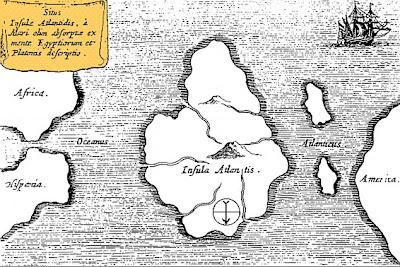 Atlantis map by 17th century scholar Athanasius Kircher.
As research continues, archaeologists and geologists are increasingly convinced that the fabled Atlantis is submerged in mud flats near Cadiz in southern Spain, the victim of a tsunami.
“This is the power of tsunamis,” Professor Richard Freund of the University of Hartford, Connecticut, leader of the international team, tells the London Mail. “It is just so hard to understand that it can wipe out 60 miles inland, and that's pretty much what we're talking about.”
According to Mail Online:

The team used a satellite photo of a suspected submerged city to find the site then surveyed it with a combination of deep-ground radar, digital mapping, and underwater technology. Buried in the vast marshlands of the Dona Ana Park they found a strange series of  “memorial cities” built in Atlantis' image by the refugees who fled the destructive tsunami. Freund said the 'twist' of finding the memorial cities makes him confident Atlantis was buried in the mud flats.

“We found something that no one else has ever seen before, which gives it a layer of credibility,” Freund said, “especially for archaeology, that makes a lot more sense."
Click here for the complete article.
Posted by Gregory LeFever at 12:02 PM