Göbekli Structures May Have Been Homes 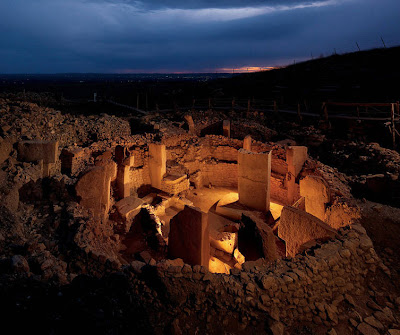 Ancient Turkish structures believed to be the world’s oldest temples may not have been religious buildings after all. Archaeologist Ted Banning of the University of Toronto says that the buildings found at Göbekli Tepe simply may have been houses for people.

The buildings at Göbekli were found in 1995 by Klaus Schmidt of the German Archaeological Institute and colleagues from the Şanlıurfa Museum in Turkey. The oldest of the structures at the site are immense buildings with large stone pillars, many of which feature carvings of snakes, scorpions, foxes, and other animals.
According to PastHorizons.com:

The presence of art in the buildings, the substantial effort that must have been involved in making and erecting them, and a lack of evidence for any permanent settlement in the area, led Schmidt and others to conclude that Göbekli must have been a sacred place where pilgrims travelled to worship, much like the Greek ruins of Delphi or Olympia. If that interpretation is true it would make the buildings, which date back more than 10,000 years to the early Neolithic, the oldest temples ever found.

However, Banning offers an alternative interpretation that challenges some of Schmidt’s claims. He outlines growing archaeological evidence for daily activities at the site, such as flintknapping and food preparation.

“The presence of this evidence suggests that the site was not, after all, devoid of residential occupation, but likely had quite a large population,” Banning said.

Banning goes on to argue that the population may have been housed in the purported temples themselves. He disagrees with the idea that the presence of decorative pillars or massive construction efforts means the buildings could not have been residential space.
Click here for the complete article.
Posted by Gregory LeFever at 1:39 PM