An Inca Written Language: Yes or No? 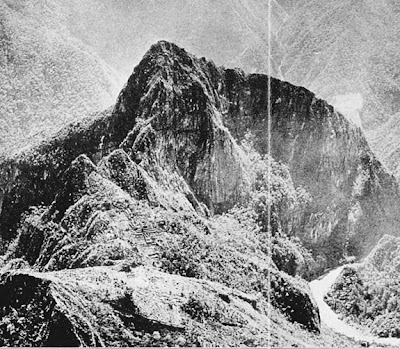 Machu Picchu as Bingham first encountered it in 1911.
From Slate.com

When the Yale University history lecturer Hiram Bingham III encountered the ruins of Machu Picchu in Peru 100 years ago, on July 24, 1911, archaeologists and explorers around the world (including Bingham himself) were stunned, having never come across a written reference to the imperial stone city. Of course, the absence of such historical records was in itself no great surprise. The Inca, a technologically sophisticated culture that assembled the largest empire in the Western Hemisphere, have long been considered the only major Bronze Age civilization that failed to develop a system of writing—a puzzling shortcoming that nowadays is called the "Inca Paradox."

The Incas never developed the arch, either—another common hallmark of civilization—yet the temples of Machu Picchu, built on a rainy mountain ridge atop two fault lines, still stand after more than 500 years while the nearby city of Cusco has been leveled twice by earthquakes. The Inca equivalent of the arch was a trapezoidal shape tailored to meet the engineering needs of their seismically unstable homeland. Likewise, the Incas developed a unique way to record information, a system of knotted cords called khipus (sometimes spelled quipus). In recent years, the question of whether these khipus were actually a method of three-dimensional writing that met the Incas' specific needs has become one of the great unsolved mysteries of the Andes.

Posted by Gregory LeFever at 7:05 PM