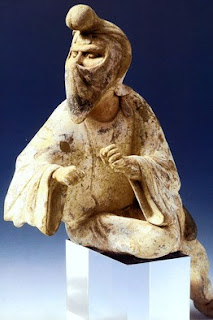 Curators and scholars continue to puzzle over an 11-inch-high burial figure that appears to be seated in a side-saddle position with a cloth draped across his face.

According to the Wall Street Journal:

Made in China during the latter part of the eighth century, this unusual Tang dynasty burial figure today sits on a shelf in the Museo di Arte Orientale (MAO) of Turin, Italy, exuding as much mystery as he does energy. To date, nobody can say exactly who or what he is—his clothes, his pose, his expression don't add up. Even his manufacture is atypical: While almost all other known burial statuettes are hollow and cast in molds, this one is solid clay and appears to have been sculpted by hand.

For the moment, MAO has him down as "a Persian riding a camel or a horse," says Marco Guglielminotti Trivel, MAO's curator of East Asian art. And this is plausible enough. Formerly owned by the Agnelli Foundation, the figure's eyes are rounded, his nose aquiline, and though most figurines show a male rider straddling his mount, sidesaddle is not unheard of. The raised fists, Mr. Guglielminotti notes, might have held reins, while the face cover—as well as a flap of cloth over the back of his neck—would have protected against wind, sun and sand.

Not everyone agrees. Marcello Pacini, who acquired the statue at auction some 20 years ago for the Agnelli Foundation, says: "I have never seen a rider with such intensity in his eyes. His is the expression of a priest honoring a god, not that of a camel rider facing some banal complication." He thinks the mystery man may be a Zoroastrian priest feeding the sacred fire.
For the complete article, click here.
Posted by Gregory LeFever at 7:26 PM