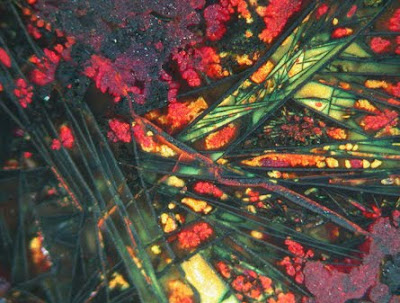 Microscopic image of copper slag from Belovode site.
An ancient settlement in southeastern Europe claims the oldest evidence of copper making, from 7,000 years ago. The recent archaeological finding suggests copper smelting was invented in separate parts of Asia and Europe rather than spreading from a single source.
The find extends the known record of copper smelting by about 500 years.
Chemical and microscopic analyses of previously unearthed material from Serbia’s Belovode site have identified pieces of copper slag, the residue of an intense heating process used to separate copper from other ore elements. The raw material came from nearby copper-ore deposits in Serbia or Bulgaria, they add.
“Our finds provide the earliest secure dates for copper smelting and indicate the existence of different, possibly independent centers of invention of metallurgy,” says Thilo Rehren of University College London.
Large numbers of copper artifacts have been found at southeastern European sites dating to more than 6,000 years ago, Rehren notes.
Click here for the complete ScienceNews article.
Posted by Gregory LeFever at 12:19 PM