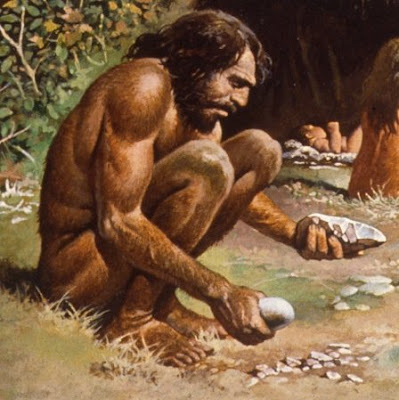 Discovery of two ancient flint hand tools is leading researchers to conclude that Neanderthals inhabited Britain about 100,000 years ago ~ or 40,000 years earlier than previously thought.
Francis Wenban-Smith from the University of Southampton, who discovered the two ancient flint hand tools used to cut meat, said tests on sediment in which they were buried showed they date from around 100,000 years ago. The country was previously assumed to have been uninhabited during this period.
“I couldn't believe my eyes when I received the test results,'” said Dr Wenban-Smith. "We know that Neanderthals inhabited northern France at this time, but this new evidence suggests that as soon as sea levels dropped, and a 'land bridge' appeared across the English Channel, they made the journey by foot to Kent.”
Early pre-Neanderthals inhabited Britain before the last ice age, but were forced south by the severe cold about 200,000 years ago. When the climate warmed up again between 130,000 and 110,000 years ago, they could not get back because, similar to today, the Channel sea-level was raised, blocking their path. The new discovery, commissioned by Oxford Archaeology, showed they returned to Britain much earlier than 60,000 years ago, as previous evidence suggested.
Click here for the complete Telegraph article.
Posted by Gregory LeFever at 12:14 PM