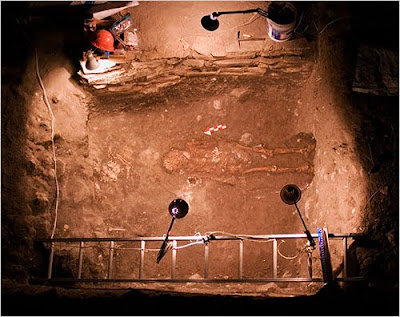 Body in the tomb is believed to have been a high priest or ruler.

Archaeologists in southern Mexico have discovered a 2,700-year-old tomb that may be the oldest such burial documented in Mesoamerica. It holds a man about 50 years old, buried with jade collars, pyrite and obsidian artefacts and ceramic vessels.
Archaeologist Emiliano Gallaga said the tomb dates to between 500 and 700 BC. “We think this is one of the earliest discoveries of the use of a pyramid as a tomb, not only as a religious site or temple,” he said.
The tomb was found at a site built by Zoque Indians in Chiapa de Corzo. It may be almost 1,000 years older than the better-known pyramid tomb of the Mayan ruler Pakal at the Palenque archaeological site, also in Chiapas.
The man is thought to have been a high priest or ruler of Chiapa de Corzo, a prominent settlement at the time. The body of a one-year-old child was laid carefully over the man's body inside the tomb, while that of a 20-year-old male was tossed into the chamber with less care, perhaps sacrificed at the time of burial.
Click here for the complete Guardian article.
Click here for a lengthier New York Times article.
Posted by Gregory LeFever at 2:09 PM