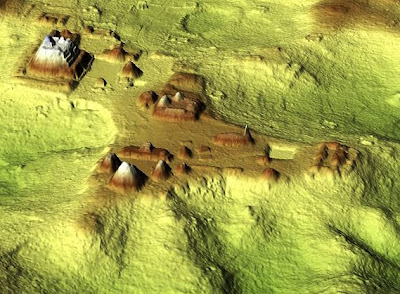 Laser technology has enabled anthropologists to strip away thick layers of rain forest to reveal images of the ancient Mayan metropolis of Caracol, showing it to be far larger than previously thought.
In an April 2009 flyover, scientists employed Light Detection and Ranging (LiDAR) equipment ~ bouncing laser beams off the ground ~ to construct a 3-D map of the settlement in western Belize.  Revealed were previously unknown buildings, roads, and other features.
According to National Geographic, University of Central Florida anthropologists Arlen and Diane Chase have spent decades hacking through the tangled undergrowth that has engulfed the powerful city that thrived between 550 and 900 AD. Among other features, the LiDAR images captured Caracol's tallest buildings, a set of palaces and temples called Caana.
"It's like literally removing all of the plant growth, so that we can see down below," Arlen Chase said.
Click here for the article and several of the 3-D images.
Posted by Gregory LeFever at 1:20 AM