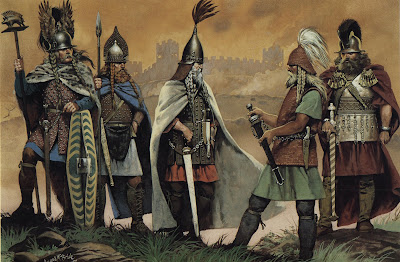 New findings from a 2,600-year-old grave in Germany suggest the Celts were much more sophisticated than previously thought. Not far from the Heuneburg, the site of an early Celtic settlement, researchers in 2010 stumbled upon the elaborate grave of a Celtic princess. In addition to gold and amber, they found a subterranean burial chamber fitted with massive oak beams..
The discovery could change history’s view of the Celts. Roman writers in particular described the heterogeneous people as barbaric, only excelling in violence and war. But that's a distorted view, according to Dirk L. Krausse from Baden-Wurttemberg's state office for historic preservation.
"There's also a bit of propaganda involved, since the Celts conquered Rome in the year 387 B.C., so they couldn't have been so primitive," Krausse explained. The findings at the Heuneburg near Hundersingen also indicate that the Celts living in the upper Danube region were more advanced than previously thought.
Researchers are hoping to learn more about the Celts' wars of domination ~ one of the greatest mysteries of central European history ~ specifically why the Celts were advancing quickly from the sixth century B.C. until the birth of Christ and then abruptly disappeared from the scene.
Image is artist rendition of 2,500-year-old Celtic warriors.
Click here for the article.
Posted by Gregory LeFever at 8:04 PM