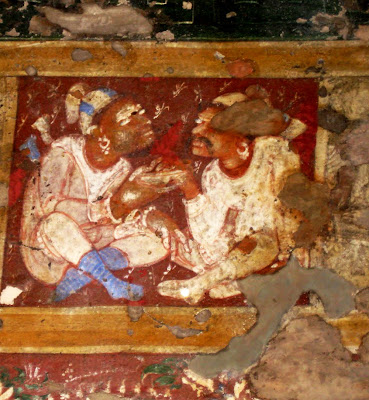 A new study of monsoon weather patterns on the Indian Peninsula over thousands of years is highlighting reasons for shifts in development of that region’s ancient civilizations.
According to Woods Hole Oceanographic Institution:

Together, the geological record and the archaeological evidence tell a story of the possible fate of India’s earliest civilizations. Cultural changes occurred across the Indian subcontinent as the climate became more arid after ~4,000 years. In the already dry Indus basin, the urban Harappan civilization failed to adapt to even harsher conditions and slowly collapsed.

But aridity favored an increase in sophistication in the central and south India where tropical forest decreased in extent and people began to settle and do more agriculture. Human resourcefulness proved again crucial in the rapid proliferation of rain-collecting water tanks across the Indian peninsula, just as the long series of droughts settled in over the last 1,700 years.

“What the new paleo-climatic information makes clear is that the shift towards more arid conditions around 4,000 years ago corresponds to the time when agricultural populations expanded and settled village life began,” says Dorian Fuller of the Institute of Archaeology, University College London. “Arid-adapted food production is an old cultural tradition in the region, with cultivation of drought-tolerant millets and soil-restoring bean species."
“There may be lessons to learn here, as these drought-tolerant agricultural traditions have eroded over the past century, with shift towards more water and chemical intensive forms of modern agriculture,” Fuller adds.
Click here for the complete article.
Posted by Gregory LeFever at 8:51 AM