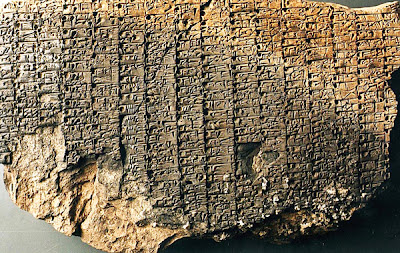 Sumer, 2600 BC, world's earliest record of music and instruments.
“We are resuscitating a dead civilization through the understanding of its dead languages,” says Gonzalo Rubio of current studies of the world’s first written languages, Sumerian and Akkadian. “ When one studies an economic document from ancient Mesopotamia, there are names of individuals entering a contract or making a purchase. These are all people who lived three or four thousand years ago, people whose names were forgotten and buried in the sand until modern scholars brought them back to a modicum of life in their articles and books.”
Rubio, an assyriologist at Pennsylvania State University, was interviewed by on LiveScience.com:

When an assyriologist holds a tablet inscribed with cuneiform characters, be it in Sumerian or in Akkadian, there is a chance that she or he may be the first person to read that text again after millennia of oblivion. Even if one is not the epigrapher who first looks at the tablets found at an archaeological site, even as a scholar reading texts at a museum, there is an overwhelming feeling of discovery and recovery, the excitement of bringing a civilization back to life by understanding it, text by text, tablet by tablet.

He said that, in terms of structure, Akkadian resembles Semitic languages such as Hebrew and Arabic, but that Sumerian actually is closer structurally to Native American languages.
Click here for the interview.
Posted by Gregory LeFever at 5:57 PM

Careful. Your title should read "Sumerian", not "Sumarian".

The "in terms of structure" part makes the comparison less kooky, although it's still a sloppy statement on his part when you consider the wide variety of differences between, say, Salish languages and Algonquian. I can only guess that maybe he's alluding to agglutination and chain-prefixing. It's a little unclear to me.

Glen, thanks so much. I made the corrections, and in defense can only fall back on the cliché that haste makes waste.

A few minutes ago I visited your own Paleoglot blog for the first time. What a treasure ~ I look forward to delving farther into it. I highly recommend it to people who visit Ancient Tides.

Thanks again, Glen, for taking the time to straighten out my errors and for visiting Ancient Tides!